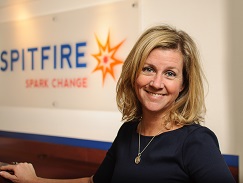 Kristen Grimm is the founder and president of Spitfire Strategies. She has extensive experience conceiving, implementing, and managing smart strategies that create lasting social change.

Kristen has helped hundreds of nonprofits and foundations around the world develop winning communication and campaign strategies to spur action on some of today’s most pressing problems and inspire many more people to get involved. She has reformed, reframed, and reimagined critical issues ranging from reproductive health, human rights, education, and environmental issues, including climate change. Recent accomplishments include a winning campaign to restore the ecosystems in the Gulf of Mexico for the Walton Family Foundation, coordinated state efforts to ensure children have quality health care coverage for the David and Lucile Packard Foundation, message guidance to support grantees working to improve education throughout the United States for the Bill & Melinda Gates Foundation, and creation of a food oasis program in Georgia for the Arthur M Blank Foundation. Kristen has worked internationally for the Ford Foundation’s global south human rights grantees, for Climateworks’ network partners in China and Europe, and on conservation issues in Mexico for Packard and Walton. Other clients include the Gordon and Betty Moore Foundation, Open Society Foundations, the Robert Wood Johnson Foundation, the Heinz Endowments, Skoll Global Threats, and the Surdna Foundation.

Kristen also enjoys teaching others the tricks of her trade and helping them reach those a-ha moments that give oomph to their communication and campaign efforts. She is the mastermind behind Spitfire’s Smart Chart, Planning to Win, and Mindful Messaging™ resources, among other big think pieces. She loves creating messages and master narratives that resonate. She thinks fast in a crisis, is deft at drawing visionary speeches out of nonprofit leaders, and is someone you want in your corner when you’re ready to go big.

Before Spitfire, Kristen worked as a fellow at the Vietnam Veterans of America Foundation (VVAF), where she focused on banning landmines, reforming the death penalty and criminal justice systems, and reducing the threat of nuclear war. She was previously the president and chief operating officer of Fenton Communications, where she wrote NOW HEAR THIS: The Nine Laws of Successful Advocacy Communications. She is a member of the 2014 Class of Henry Crown Fellows at the Aspen Institute. As part of her Henry Crown Fellowship, Kristen also started AndACTION, a tool that connects issue-oriented film and TV storylines to mission-driven organizations that can use them. The idea came to her after the realization—possibly while staring at her favorite Buffy the Vampire Slayer poster—that hundreds of great film and TV storylines on social and environmental topics pass right by cause organizations, which don’t find out about these opportunities or how to use them until it’s too late.

Kristen currently serves on the boards of Grist, Alaska Wilderness League, and the Potomac Conservancy. She has a BA from Smith College.